At dinner in Brussels with Eduardo Bertoni, Argentina’s DP Commissioner (National Director, Access to Public Information Agency) we discovered that the review of Argentina's EU adequacy status is already underway (p.17 and S4). During his visit to Brussels, Mr Bertoni took the opportunity to visit the relevant staff at the European Commission to begin the process. Also present at the dinner were the top national experts, PL&B International Report correspondents and PL&B conference speakers: Danilo Doneda from Brazil (p.14 and S5) and Ana Brian Nougrères from Uruguay (p.16 and S13).

I also met at the conference Hiroshi Miyashita, Associate Professor, Chuo University, Tokyo. When discussing the recently adopted EU-Japan mutual adequacy agreement, announced on 23 January, he told me that Japan’s own review of its data protection law had already begun. The aim is that Japan’s new law will be strengthened to become “more adequate” in time for the next EU-Japan review (p.12, p.18 and S8), as he explains in this edition. This 32nd Anniversary edition, as always, brings you authoritative reports by leading experts in this ever developing field. The GDPR’s ripple effect is also evident in countries as far apart as Brazil and South Korea (p.17 and S8), as we will learn in Cambridge.

Such meetings with the main actors bring to life the vast canvas of the tables of 132 data privacy laws and 28 bills around the world (see the supplement), prepared by Professor Graham Greenleaf, our Asia-Pacific Editor. This is the 6th edition of these tables which started in 2011. His authoritative commentaries (pp.14-20) provide analysis and context to this world leading feature often referenced by the United Nations, Council of Europe, European Commission, European Data Protection Supervisor, OECD, national policy makers and Data Protection Authorities (reference 5 p.17).

By the time we publish the April edition of PL&B International Report, we should have a clearer idea of the data protection law implications of Brexit (pp. 26 and 27) a subject on which I have written to the UK’s Prime Minister, and which we cover fully in PL&B United Kingdom Report.

The PL&B annual conference early discount registration period runs until 15 April, by which time the conference programme will have taken shape. Places are already going fast at this early stage.

In addition, we have now announced Privacy Laws & Business’s:

Laura and I always welcome your comments and questions and look forward to meeting you at one or more of these events. 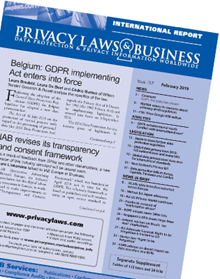