It was 40 years ago today

It was 40 years ago today that my article in The Times was published in the United Kingdom. It made the case for the Minister of Transport to make it public whenever a safety related fault was found in cars. Until that time, such recalls had been communicated to car dealers but, were covered by the Official Secrets Act so were not available to car owners or the media. Car manufacturers were not keen that information on their faulty cars became known, a disincentive to potential buyers of their models.

A recommendation to government on data protection law aspects of Brexit

Last month, I wrote to the UK’s Prime Minister, other ministers and the Shadow Minister for Exiting the EU with the July edition of the PL&B UK Report. I made the case, from the data protection law perspective, for the UK staying within the European Economic Area supported by the experience of Iceland outside but alongside the European Union.

Our lead story was on the presentation by Iceland’s Data Protection Commissioner, Helga Þórisdóttir, at last month’s PL&B 31st Annual International Conference in Cambridge. She explained the flexibility this position provides to Iceland closely matching the flexibility sought by the UK government in its negotiations with the EU. A video clip of her presentation on Iceland’s data protection law is on our YouTube channel.

As an article about Iceland would normally be in PL&B International Report, I invite you, as a subscriber, to download a copy of this article together with a copy of my letter to the Prime Minister.

We remain forward looking. Accountability is a continuing theme. This edition has an article on blockchain (p.19), probably the most complex article we have ever published but made as clear as possible with the help of the team responsible for this conference session. The article on preparing for the GDPR in an Italy-based multinational company demonstrates that such work is the art of the possible (p.23). Certification is a work in progress and takes different forms as we see in Italy (p.15) and the UK (p.24).

Collective action under Art. 80 GDPR gets the green light

It is clear from the start of my article in The Times, that the law suit in the US against British Leyland regarding their allegedly defective cars was conducted by a group of consumers. This similar right for individuals to a private right of action is now available under the GDPR and we will explore national experience and the potential for such action in the future in a half day conference in Brussels on 23 October (p.25). PL&B is organising this conference together with the Brussels Privacy Hub, a privacy advocacy organisation so we will cover this subject from as many angles as possible. We will keep you informed. 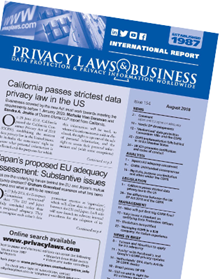 California passes strictest data privacy law in the US

Businesses covered by the new Act must work towards meeting the requirements before 1 January 2020. Michelle Hon Donovan and Sandra A. Jeskie of Duane Morris LLP report from California.