Maintaining momentum for the UK’s data protection law despite Brexit

This 100th edition of PL&B United Kingdom Report comes 18 years after the launch of this title and coincides with the government’s acceptance of the Withdrawal Agreement from the European Union. We analyse the data protection implications for organisations and make recommendations on key business priorities (p.1).

While data protection law issues have not been at the forefront of reporting on the UK’s withdrawal from the European Union, the Prime Minister has referred from time to time to the importance of the free flow of data between the UK and the European Union.

Last month, with the intention to provide supportive evidence on the working of data protection law in the European Economic Area, I wrote to the Prime Minister; Department for Digital, Culture, Media and Sport; Exiting the EU; and other relevant ministers; Opposition parties and the Scottish government. My recommendation based on the experience of Norway (PL&B International Report October 2018 p.1) and Iceland (PL&B United Kingdom Report August 2018 p.1), was that from the data protection law perspective, it would be best for the UK to remain in the European Economic Area. Today, I was pleased to receive a response from the Scottish Government which endorsed this position stating:

On 12 November, the ICO announced that it had secured its first prison sentence, prosecuted under the Computer Misuse Act 1990 (p.17). With the ICO’s staff at around 700, Elizabeth Denham, Information Commissioner, clearly has a well-resourced team to tackle criminal behaviour and civil actions with more vigour than in the past. Facebook has had the maximum fine of £500,000 imposed under the Data Protection Act 1998 (p.15). We should expect the Information Commissioner to greatly increase sanctions now she is investigating organisations with her stronger powers under the Data Protection Act 2018.

Freedom of Information Act edging towards the private sector

I established PL&B UK Report in 2000 specifically to bring together in one publication news and analysis of the UK’s new Freedom of Information Act, together with our work on the Data Protection Act. The trend is for the FoI Act to be expanded gradually to private sector companies which are carrying out work on behalf of the public sector. The latest Private Member’s Bill aims to extend it further in this direction (p.23).

On 28 November in London, we will hold the latest in our series of GDPR Help! Roundtables, Maintaining Momentum. The ICO’s lead on certification and codes of practice will update us on her work and that of the European Data Protection Board in this area. We will also exchange experience on adapting to the UK’s Data Protection Act 2018. Only a few places remain so now is the time to register to secure your place at this Roundtable. 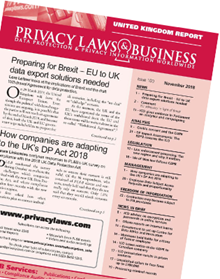 Lore Leitner looks at the implications of Brexit and the draft Withdrawal Agreement for data protection.