The crumbling fabric of the Houses of Parliament was not in evidence on 31 October in the committee room where I and a small group of data protection law specialists met five members of the House of Lords, including Lord Tim Clement-Jones, the peer leading their scrutiny of the Data Protection Bill (pp. 6-7). We had met Lord McNally when he was a Justice Minister in the coalition government and spoke at PL&B’s conference in July 2013. He arrived directly from a meeting of the House of Lords Artificial Intelligence Committee which had just held a hearing with Elizabeth Denham, Information Commissioner.

Lord Clement-Jones made it clear that he had an hour for this session and first wanted to know about issues in the Data Protection Bill affecting everyday compliance before moving on to “future proofing.” He invited all of us to submit papers to support our points. Fortunately, immediately after being invited to the meeting by former Liberal Democrat MP, Parmjit Singh Gill, we asked for input from our network. I had edited the feedback into a paper with six points which I presented to Clement-Jones and his support staff member, and is available on request.

The complex legal language of the Bill does not help one’s understanding of the text and one of the group pointed out that the wording of the government’s explanatory material would communicate the Bill’s provisions in a much simpler way. But one cannot expect that everyone’s concerns will be resolved whatever the wording of the Data Protection Bill.

Take, for example, transfers of personal data in a marketing context. Companies may want more clarity for those who may transfer or sell on personal data to others. Marketing managers may have come to accept that ‘selected third parties’ is no longer an acceptable form of words. But at the time of data gathering, it may not be possible to be company specific. Data controllers would like confirmation that, for example, ‘Car Insurers’ rather than a specific company would be acceptable to include in the tick boxes on a consent form.

I expect that this degree of detail is a matter for the Information Commissioner’s guidance or a Code of Practice rather than the wording of the future Data Protection Act. Similar detailed points probably involve every sector.

On 6 November, I attended a seminar at the British Library with the above title organised with the Alan Turing Institute and the National Institute of Data Science.* AI can be quicker or better than humans at specific tasks (like playing chess or making multiple calculations quickly) but one machine or system cannot emulate the range of thoughts, skills or empathy demonstrated by one human. Points which emerged included:

1. “science fiction is fiction not science”

2. there are risks attached to automating human relationships

3. there should be a single descriptive language about what AI can do

4. the GDPR’s safeguards for individuals subject to automated decision-making are illusory because there could be a bias in the underlying logic beyond an individual’s understanding

5. the best way to achieve democratic oversight of AI is to read the terms and conditions associated with websites and apps and not to tick the “Agree” box, unless you agree with the company’s use of your personal data

6. if tech companies are too powerful, described as “the new feudalism,” it is because most people give up their personal information freely

7. tech companies can be forces for good, for example, Google Translate does a good job with 100+ languages run entirely with AI and employs no linguists.

PL&B UK Report will be back in January and meanwhile we will keep you updated via PL&B’s e-news service.

Please send your ideas for future articles to Laura Linkomies, Editor, at laura.linkomies@privacylaws.com. 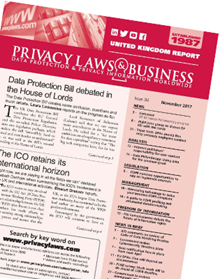 Data Protection Bill debated in the House of Lords

The Data Protection Bill creates some confusion, questions and much debate. Laura Linkomies reports on the progress so far.