PL&B launched this PL&B UK Report at the end of 2000 as a separate publication to reflect my objective of covering both the working of the UK’s Data Protection Act 1998 and the just adopted Freedom of Information Act which entered into force in 2005.

We have reported on management implementation, ICO decisions, Tribunal decisions, court decisions, new bodies to come within the scope of the FoIA, examples in practice of the extension of FOI to companies providing services to public sector bodies, and occasionally lessons to be learned from foreign jurisdictions (PL&B UK Report November 2015 pp.14-16). After 10 years in operation, last year the government established the Burns Commission (p.19 and PL&B UK Report November 2015 p.16) to review the working of the law.

At Freedom of Information: Where does the right to know end? on 17th March in London, all speakers were relieved by the fact that the Freedom of Information Act had emerged unscathed by what had been perceived as a critical Burns Commission (PL&B UK Report September 2015 p.9). Companies are, no doubt, relieved that the government has no plans to amend the law to extend the FoI Act to companies providing services to public sector bodies.

Maurice Frankel, Director, the Campaign for Freedom of Information, explained that several factors led to the Commission’s support for, in effect, little change: the weight of evidence that the law was fairly balanced between requesters and public authorities, and opposition to weakening the law by the media and MPs of all parties. As a result, before the Commission’s report was published, the government in the person of the FOI minister, Matthew Hancock, announced the night before the Commission's report, in its only pre-publication announcement, that there would be "no legal changes" to the FOI Act. The FoI Act itself would not be amended.

The majority of the Commission's recommendations (including those that would strengthen the Act) would require legislation to implement. So the apparent ruling out of legislation seems to indicate that most of the recommendations will not be implemented. See below for Maurice Frankel’s note explaining several of the most important aspects of the review. In short, Frankel stated that “no change” was a victory for the FOI law based on support for the law from many sides.

Steve Wood, Head, Policy Delivery, the Information Commissioner’s Office, stated that it is important to have an independent accessible arbiter, the ICO, now with 10 years of experience. The starting point for FOI is disclosure and this principle is even more explicit in the Environmental Information Regulations based on the Aarhus Convention produced by the UN Economic Commission for Europe. This Convention in turn led to an EU directive in 1998 on access to environmental information titled the “Directive on access to information, public participation in decision-making and access to justice in environmental matters”, which the ICO also enforces.

Access has to be balanced against any harm, such as individuals’ privacy, that could be caused by disclosure. The timing of disclosure can affect a claim of public interest. It has to be recognised that government sometimes needs a private sphere for discussion and taking decisions. The public sector should not shy away from using the vexatious request provision to decline FoI requests but should keep an audit trail to show their evidence for taking this type of decision.

The ICO’s current budget for FoI work is £3.7 million but with an increase, it could do more proactive work, such as audits. The ICO is now also responsible for enforcing the Reuse of Public Sector Information Regulation.

Martin Rosenbaum, Executive Producer of Political Programmes, the BBC, who trains journalists and makes many FoI requests, paid tribute to the crucial role of the Campaign for Freedom of Information in presenting persuasive evidence to the Burns Commission.

He has several FoI requests which have been outstanding for longer than the statutory deadline to: the Cabinet Office (four months); the Treasury about a specific topic in a budget several years ago (five months); and the Home Office about files marked “open government” (six months).

PL&B UK Report will continue to monitor major FOI developments that have an impact on the public and private sectors. Speakers at the event referred to the following future issues:

1. The rapid growth of information and whether records managers can keep pace in organising archives
2. Increasing outsourcing of work to private companies not subject to the FoI Act
3. Bring your own device – where is the information stored?
4. Information stored in cloud and other external systems. Much information gets lost as a result of poorly drafted contracts. The ICO helpfully published in March 2015 Transparency in Outsourcing: A roadmap; and Outsourcing and freedom of information
5. Use of private systems by ministers and officials.
6. Private water companies, such as Northumbrian Water Group, are now clearly subject to the Environmental Information Regulations.
7. Decisions being made by software. With the growth of Artificial Intelligence, one can expect future FoI requests for computer code, as machines do not have privacy rights.

PL&B UK Report will continue to monitor major FOI developments that have an impact on the public and private sectors. Please keep Laura Linkomies, Editor, informed of both your FoI and data protection law priorities so our articles can reflect your interests and needs. 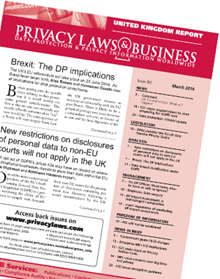