On the threshold of adopting a new Data Protection Act

The UK is on the threshold of adopting a new Data Protection Act (p.1). Guernsey (p.1) and Jersey (p.4) already have new data protection laws while the Isle of Man is expected to follow soon.

The Facebook/Cambridge Analytica scandal rumbles on with this affair providing the impetus to Parliament, in the last few days of the legislative process, giving the ICO stronger powers to deal with organisations which fail to comply with the law.

Using its existing powers, the ICO continues to impose sanctions on both public and private sectors. Today, 17th May, the ICO announced that it had fined the Crown Prosecution Service (CPS) £325,000 after they lost unencrypted DVDs containing recordings of police interviews. The DVDs contained recordings of interviews with 15 victims of child sex abuse, to be used at the trial. This fine follows a similar incident in 2015.

The two articles on Facebook/Cambridge Analytica in this edition (pp. 12-17) provide valuable insights into:

• the lateral thinking rationale for the company’s political micro-targeting given by Christopher Wylie, the Cambridge Analytica whistle blower, at a conference in London last month; and

• its impact on the political process by Professor Colin Bennett, the University of Victoria.

The authors of these two articles will be at the Cambridge Conference if you would like further insights. Yesterday, Chris Wylie gave evidence to the US Senate’s Judiciary Committee in Washington DC. For more details see:

Our focus continues to be not only analytical but also on practical implementation, as you will see in the four article management section.

It is now just over six weeks until Navigating GDPR: The art of the possible, PL&B's 31st Annual International Conference, 2-4 July 2018, at St. John’s College, Cambridge. How do you plot your route? Join participants from 20 countries. Companies will share their experience and future plans, and lawyers will offer their advice. Policy-makers from the European Commission and the UK will explain their direction and DP Authorities from France, Ireland, Iceland and the UK will provide guidance.

We look forward to meeting you in Cambridge in July, and recommend that you sign up quickly, as demand is great and places are limited. 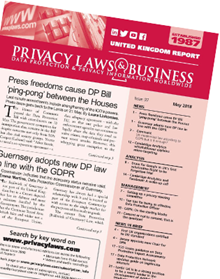 Press freedoms cause DP Bill ‘ping-pong’ between the Houses

Last minute amendments include strengthening of the ICO’s powers.  Press issue goes back to the Lords on 21 May.